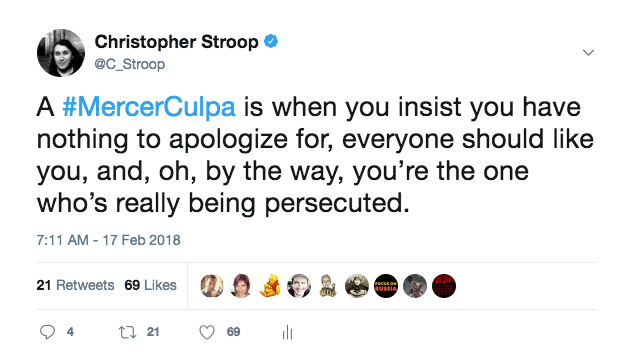 Let’s Make the Most of the #MercerCulpa

Thanks to a deluge of important commentary about the fate of DACA and Dreamers amid the failure of an immigration deal, news about the horrific Parkland, FL school shooting, and news about special Counsel Robert Mueller’s investigation into Russian election meddling and Trump team collusion, Rebekah Mercer’s godawful gaslighting op-ed has not generated as much attention as we might have expected.

But why pay attention to such self-serving PR passing as “commentary”–with the full complicity of The Wall Street Journal–at all? Two reasons. Firstly, Bekah’s #MercerCulpa provides us with a treasure trove of ammunition to use against her as we work to expose the ways in which oligarchs are corrupting our electoral processes, advancing authoritarianism in America, and in the process enriching themselves at the expense of the rest of us. For a brilliantly wonky, detailed takedown, see Brendan O’Connor’s “Rebekah Mercer is Full of Shit” on Jezebel. This will get you up to speed on the Mercers’ roles as Trump megadonors and bankrollers of Milo and Breitbart. In addition, for those having trouble reading the original op-ed because of WSJ’s paywall, O’Connor quotes it at length.

The #MercerCulpa: For When it’s the Little People Who Need to Apologize To You

Secondly, humor is an important weapon in any anti-authoritarian resistance, and Bekah’s utter tone-deafness is nothing if not funny. It inspired me to write a parody op-ed under the name of B. Mercenarius III, “Forget the Media Caricature: Allow Me to Caricature Myself.” Since then, I’ve taken to suggesting on Twitter that we use the hashtag #MercerCulpa to mock Rebekah and her op-ed, all the while drawing attention to Trumpist billionaires’ and other radical right-wing ideologues’ bad faith.

If Dan Savage once campaigned, with notable success (the campaign has a Wikipedia page), to define santorum as “the frothy mixture of lube and fecal matter that is sometimes the byproduct of anal sex,” then why can’t we define the mercerculpa as “an extended exercise in gaslighting that paints oneself as unfairly maligned and one’s offenses as virtues, instead of apologizing for them.” I’d say we’re off to a good start with my parody op-ed and one #MercerCulpa tweet highlighted in Greg Dworkin’s latest Abbreviated Pundit Round-Up over at Daily Kos and a number of hard-hitting and hilarious #MercerCulpa tweets popping up on Twitter.

Below you’ll find some of my favorite #MercerCulpa tweets. Please head over to Twitter and add your own!

So who thought it was a good idea for Rebekah Mercer to put out that op-ed? When I got to the part where she said she supported and continues to support 45 because he promised to root out corruption on both sides of the aisle, I burst out laughing. #MercerCulpa

When everybody hates you, and you can’t figure out why, because all you ever did was give millions to fascists, it’s time to issue a #MercerCulpa.

Not a mea culpa; after all you did nothing wrong. And you’d have gotten away with it too, if it weren’t for these meddling journos.

"Credible death threats" may be the norm for poors who lack security systems, but to me they are really quite stressful. #MercerCulpa

“I have degrees from Stanford in biology, mathematics, and operations research and engineering economic systems… one day I will combine all my knowledge to create a nation of perfect, rich white people.” #MercerCulpa

There is a tactic people use when confronted about behavior or statements: they shift to a vague, airy defense, theme always being a variation on "what I'm about".#MercerCulpa is the platonic model of that tactic.

One thought on “Let’s Make the Most of the #MercerCulpa”