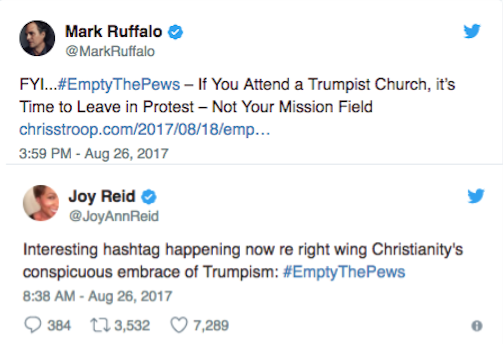 Ex-Evangelicals in 2017: A Not Your Mission Field Year in Review

2017 has been a devastating year for America, and a disheartening year for those of us who care about human rights and democracy, and who have been resisting the rise of American authoritarianism under our current, illegitimate, president. This group includes the ex-Evangelical community, many members of which have shown dedication to exposing the authoritarian, abusive, and theocratic nature of the conservative, largely white Evangelicalism we come from and that represents Trump’s single most supportive demographic. And on that front, we do have accomplishments to celebrate.

2017 has been a year of extreme right-wing populist backlash against social progress and human rights, not just in the United States, but in Europe as well. Putinist Russia is both a center and a driver of the dark forces rising, with representatives of the Russian government and the Russian Orthodox Church playing a key role in global right-wing networks. Prominent American Evangelicals and Catholics, like Franklin Graham and Brian Brown, respectively, look to cartoonishly macho Russian President Vladimir Putin for “moral” leadership, despite the enforcement of a Russian law restricting the freedom of religious minorities, particularly Protestants.

And yet this moment of right-wing backlash has sparked fierce resistance, giving rise to powerful pushback from what we might, tongue somewhat in cheek, call the real moral majority in the United States–the vast majority of us who oppose the theocratic, patriarchal, white supremacist agenda of white Evangelicalism and the ongoing nightmare of Trumpism, which is essentially white Christianity in power. This moment of neo-fascist machismo is also the moment of #MeToo. And I believe that 2017 will go down in history as the year the already emerging and coalescing ex-Evangelical, community became a movement. My hope is that more and more decent people will see the value in ex-Evangelical and other ex-fundamentalist voices and contributions to the fight for American democracy and human rights at home and abroad. I am thankful that, as ex-Evangelicals gain more media attention, this appears to be happening.

I launched ChrisStroop.com and this blog in February 2017, giving the blog the name Not Your Mission Field in May. Prior to that time, I had been making contacts through Twitter with other ex-Evangelicals and with people interested in ties between Russia and the U.S. Right, my weird combination of life experience and knowledge giving me the ability to speak not only to two of the key issues surrounding Trumpist America (Russia and the U.S. Christian Right), but also the connections between them. Thus before trying my hand at blogging, I had become somewhat widely known as a Twitter personality for my threads on these matters and their relationship to authoritarian ideology and psychology.

Meanwhile, the ex-Evangelical Twitter community had started to connect via hashtags like #SpiritualAbuseIs, coined by spoken word poet Emily Joy, and #YouDontKnowEvangelicals and #YouMightHaveGrownUpEvangelicalIf, some of my earlier hashtag attempts. #YouDontKnowEvangelicals continues to experience steady, if relatively light, use, and #YouMightHaveGrownUpEvangelicalIf has been the subject of multiple episodes of the Holy Heretics podcast. But our first bigger breakthrough to a broader public came with #ChristianAltFacts, which I coined on February 24, 2017, following on the heels of the first installment (with blogger Grete Howland) in my ongoing Ex-Evangelical Conversations series, and which quickly trended.

20. An example: Growing up I was repeatedly told there is evidence that humans and dinosaurs lived at the same time. #ChristianAltFacts

Religion and literature scholar Christopher Douglas inspired #ChristianAltFacts through his astute analysis in “The Religious Origins of Fake News and ‘Alternative Facts,'” a piece that anyone wanting to understand the authoritarian dynamics of conservative Evangelicalism and other forms of fundamentalism should read, along with this one.

I coined #EmptyThePews in August 2017 to protest white Evangelical complicity in the white supremacist and neo-Nazi activity in Charlottesville, VA, where counter-protester and activist Heather Heyer was murdered. The hashtag quickly took off, has trended multiple times, and was noted and amplified by figures including John Pavlovitz, Rachel Held Evans, Joy Ann Reid, and Mark Ruffalo.

I wrote about #EmptyThePews both here and for Religion Dispatches, was interviewed about it by Catherine Woodiwiss for Sojourners, and had great conversations about it on the #AskSteveAustin Podcast, Exvangelical with Blake Chastain, and State of Belief Radio with Rev. Dr. Welton Gaddy.

As is true of the American Resistance more broadly, women’s voices and leadership are key to the ex-Evangelical community, and it was two queer women, the above-mentioned Emily Joy and writer Hannah Paasch, who gave us the powerful hashtag #ChurchToo in order to call out sexual assault and abuse in Christian contexts. The hashtag campaign quickly went viral, resulting in both national and international news coverage. It is hard to overestimate the significance of this breakthrough in terms of exposing pervasive Evangelical abuse, and I am so grateful for the work that Hannah and Emily do.

Finally, in December 2017, I helped get the hashtag #RaptureAnxiety to trend in response to the Trump administration’s decision to recognize Jerusalem as the capital of Israel. (If you need a primer on Christian Zionism and what it has to do with Evangelical apocalypticism, click here.) The hashtag was covered in Patheos blog Daylight Atheism and by Raw Story and Vox. Ex-Evangelicals are breaking through, and this is an achievement that belongs to all of us who have come together and begun to speak out about our experiences in authoritarian Evangelicalism. We have unique insights into the serious threat conservative, mostly white Evangelicalism represents to human rights and American democracy, and we are finally getting some people in the media to listen. Let’s keep it up in 2018.

In considering the evidently increasing impact of ex-Evangelical voices in the media, it would be remiss of me not to highlight some of the best and most influential ex-Evangelical writers and pieces of 2017. Kathryn Brightbill is a former homeschooler and ex-Evangelical activist who should be on the radar screen of anyone interested in the movement. She published an immensely important op-ed in The LA Times, “Roy Moore’s Alleged Pursuit of a Young Girl is a Symptom of a Larger Problem in Evangelical Circles,” on September 10, 2017. This is one of the year’s absolute must-reads.

In addition, religion scholar and, although she doesn’t talk much about her personal life and past, ex-Evangelical, Julie Ingersoll has published a number of important pieces on Evangelical authoritarianism and the influence of Christian Reconstruction this year, pieces that were often picked up by multiple outlets, thus increasing exposure. For anyone who wants to understand hardline Evangelical ideology and tactics, her book Building God’s Kingdom: Inside the World of Christian Reconstruction is required reading.

Over the past year, I have been grateful to have the opportunity to meet with Julie multiple times in person, including at this year’s American Academy of Religion conference in Boston, and I value her highly as both a colleague and a friend. She has helped to amplify the impact of #EmptyThePews and has worked with other younger ex-Evangelicals like Kathryn. Here I want to highlight a recent viral piece in which she discusses end times theology in relation to Trump’s Jerusalem move, nodding in the process to ex-Evangelicals who consider rapture theology abusive, even though she had to fight her editor to keep that much appreciated nod in.  “Why Trump’s Evangelical Supporters Welcome his Move on Jerusalem” is a must read for anyone interested in U.S. foreign policy, American politics and the Christian Right, and/or the ex-Evangelical community.

In addition, while I am not sure if Diana Butler Bass considers herself an ex-Evangelical, she is at the very least a friend of the movement with very valuable insights into conservative Christian ideology. I want to give her a shout-out here and recommend her article on the Jerusalem move and Evangelicals, “For Many Evangelicals, Jerusalem is about Prophecy, Not Politics.” (Incidentally, I would argue that prophecy is always about politics, but authors don’t write their own headlines in any case.)

As of this writing, Not Your Mission Field has 208 subscribers. Its daily page views sometimes soar into the thousands, and often top 100 even when I’m not producing new content or pushing the site hard. All in all, I consider these to be very solid results for my first (not quite) year of writing this blog. Here are the year’s top three posts (number of views current as of this writing):

Educated Evangelicals, Academic Achievement, and Trumpism: On the Tensions in Valuing Education in an Anti-Intellectual Subculture – March 6, 2017. 23,243 views – not bad for a piece with such a cumbersome title!

FYI…#EmptyThePews – If You Attend a Trumpist Church, it’s Time to Leave in Protest – Not Your Mission Field https://t.co/eVzqmhKXvr

I would also consider it both a personal and blog highlight to have interviewed some amazing people for Ex-Evangelical Conversations. Don’t miss the installments featuring Tori Williams Douglass on white Evangelicalism’s racism and singer-songwriter David Bazan on his religious deconstruction in relation to his music.

In addition to blogging here, this year I continued to be a regular contributor to Religion Dispatches; I published a second policy long read with Political Research Associates; and I was invited by both Al.com and Playboy to comment on Evangelicals and Roy Moore. With my credentialed Russia expert hat on, I also published a centennial retrospective on the Russian Orthodox Church and Bolshevism for Eurasianet’s The Red Legacy series. It’s one of the pieces of journalism I’ve done that I’m most personally proud of, and it was nice icing on the cake to see it picked up by The Moscow Times.

I would like to note that our ex-Evangelical Facebook support group, called Exvangelical, as it was founded by Blake Chastain, initially for supporters of his podcast of the same name, has grown by leaps and bounds in 2017, and is now a very active group with 1,747 members as of this writing. If you have felt isolated as you’ve pulled away from toxic Christianity, you are not alone, and we would be happy to have you join us there.

I hope that the above highlights of 2017 will be encouraging to readers. Ex-Evangelicals have made significant achievements this year and are increasingly being recognized as worthy of media attention. I expect this to continue in 2018, as the media has slowly, only in the face of Trumpist horrors, begun to provide space for voices harshly critical of Evangelicalism with respect to its abusive, authoritarian, and theocratic nature. Ex-Evangelical contributions are critical in resisting the current hard-right regime.

Finally, Not Your Mission Field remains ad-free, and I am committed to keeping it that way. With that in mind, if you appreciate the work I do, and you are able, I would be very grateful if you would pay for it, whatever you feel is appropriate. Monthly pledges can be made and processed via my Patreon, and they make it possible for me to worry less about my uncertain career/employment future (because I will no longer have a position with benefits at the University of South Florida, though I will teach classes there next fall, I very well may not be able to have health insurance after July 2018), and thus to devote more time to writing and ex-Evangelical advocacy and activism. My sincerest thanks goes out to my current supporters.

Signing off with “Happy New Year” seems almost inappropriate, or at least tone-deaf, given all the damage that Trumpism and the Christian Right have done this year, and that they will undoubtedly continue to do in 2017. But I see in the rise of the ex-Evangelical movement, along with the wider Resistance, a glimmer of hope. On that note, best wishes to all decent Americans in the year ahead. We are the majority.

One thought on “Ex-Evangelicals in 2017: A Not Your Mission Field Year in Review”