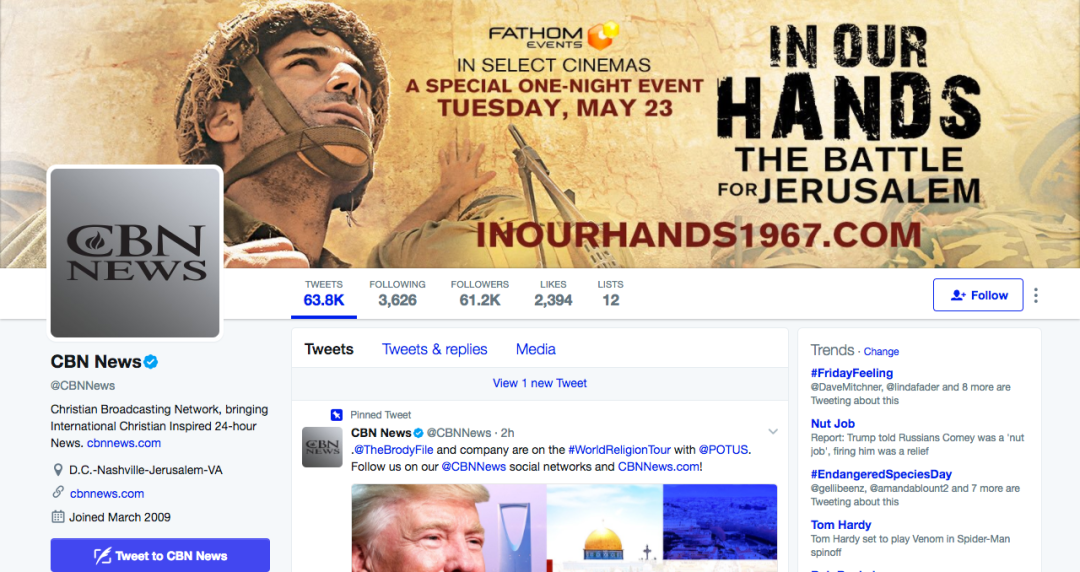 As increasingly embattled #SoCalledPresident Trump embarks upon his first foreign trip in office amid more damning revelations about what he told Russian Foreign Minister Sergey Lavrov and Ambassador Sergey Kislyak in the Oval Office on May 10, I think it’s worth taking a few moments to pause on the reaction–or rather, mostly, non-reaction–of the Christian Right to what we’ve learned of Trump’s incredibly irresponsible behavior during that meeting.

Today we learned that Trump, who will give a speech in Israel on Tuesday, May 23, actually boasted to the Russian officials that his firing of “nut job” FBI Director James Comey took “great pressure” off of him. I’d like to focus, however, on what we learned earlier: namely, that Trump shared with the Russians code word intelligence about ISIS from a foreign. Code word intel is so highly classified that it is typically only known to a handful of people in the government. In addition, Trump named the city in which our foreign partner’s asset gathered the information, putting that asset and our intelligence sharing relationship with this partner at risk. And that partner, of course, turned out to be Israel.

That’s right, folks. Our incompetent kleptocrat-in-chief not only compromised our own national security and the future of an important intelligence sharing relationship, but also the national security of our ally Israel. Now, can anyone think of a large segment of conservative Americans who consider themselves greater friends to Israel than anyone else who should probably be upset about this? And yet the self-proclaimed “philo-Semitic” Christian Right has decided to collectively yawn at this turn of events. Looking to the usual suspects, you will be hard-pressed to find anything apart from deflection (but Hillary!) or oblivion. We have another one for the “egregious actions that will not get white Evangelicals to dump Trump” file. All signs indicate that not only are they still standing by their man, but that they will not even acknowledge he endangered Israel’s security and the US-Israeli relationship. So far, the official Israeli line that intelligence sharing will continue is designed to help Trump save face, but behind the scenes many in the Israeli government must be livid.

But what about those Christian Right usual suspects? Well, the day after The New York Times broke the story that Israel was the partner whose code word intelligence Trump shared with Russian officials, Bryan Fischer of the American Family Association blithely tweeted a prayer for the conversion of the Jews as if nothing had happened.

This toxic behavior is par for the course and nothing out of the ordinary for our theocratic “philo-Semitic” Evangelicals, but one might have thought even Bryan Fischer might take pause the day after such news broke, or that he would at least have acknowledged the problem, given that he wants to convert the people affected and all. But nope.

Meanwhile, the Christian Broadcasting Network (CBN) went right on peddling the kind of content that Christians who view Israel primarily through the lens of specifically Christian apocalyptic prophecy have an insatiable appetite for. Without bothering to notice that #IllegitimatePresident‘s recent actions threatened Israel’s security, the network’s Twitter account enthusiastically touted its exclusive interview with U.S. Ambassador to the U.N. Nikki Haley, who told CBN’s David Brody not only that the Western Wall is a part of Israel, but that the United States should move its embassy from Tel Aviv to Jerusalem. CBN’s audience generally believes that Israel must expand to its ancient proportions before Christ will return in what is known as the rapture, so this is music to their apocalyptic ears. That their “Cyrus the Great” compromised Israel’s national security is apparently, however, not their concern.

Indeed, the team behind CBN’s The Brody File is accompanying Trump on his international “World Religion Tour,” where you can bet they will be pushing the Christian apocalyptic prophecy angle. No serious foreign policy advisors are known to be accompanying #IllegitimatePresident on the trip, so, um, this should go well?  ¯\_(ツ)_/¯