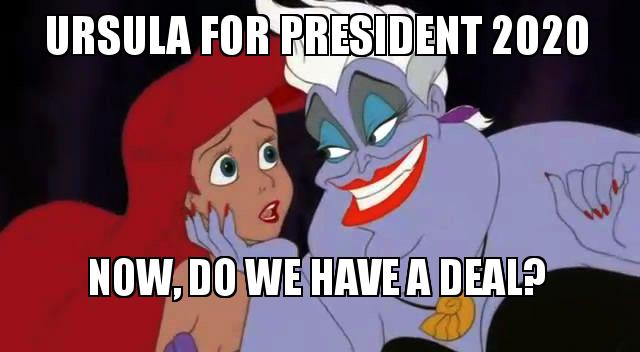 My fellow Americans, let’s face facts. The White House is occupied by a cartoon villain. And here’s the kicker. He’s not even a good cartoon villain. Let me submit as exhibit A #SoCalledPresident’s jaw-dropping Twitter tantrum from this morning:

If you can read that and place Donald J. Trump anywhere above, say, Negaduck (who comes in at 2,375 on my authoritative list of cartoon villains), well, all I can say is I question your taste. (Actually, I could say a lot more, but I’ll save that vitriol for the pathetic cartoon villain welcoming Russian cartoon villains in the Oval Office.) #IllegitimatePresident steals power with the help of the Russians, and when pressed on it he acts like the giant man-baby he is on Twitter? Honestly!

Our manic-Twittering pussy-grabber-in-chief is a serious loser in the villain department. Consider the fact that he doesn’t even have a villain song, and I don’t know about you, but I can only imagine any attempt he would make at singing would be a total disaster.  If Trump were to have a villain song, I suppose he’d have to pull a Gaston and have someone else sing it for him. But who would play the role of LeFou alongside such a vile mediocrity? I mean, Gaston (No. 147 on my authoritative list) was at least sort of handsome and articulate in a brutish and vacuous way. Our #SoCalledEvilPresident can’t even pull that off.

With all that in mind, I think it’s safe to conclude that even Negaduck would make a better evil president than the one we’re stuck with (for now). But which cartoon villains would make for truly outstanding evil presidents? My humble (but correct) top five selections are as follows.

Never to be seen without her cigarette holder and lavish fur coat, Cruella de Vil from Disney’s 1961 101 Dalmatians is a villain with style, something utterly lacking in the current occupant of 1600 Pennsylvania Avenue. Further, although Cruella does not sing her own villain song, she has a memorable one to her name. Cruella is a strong woman and a skilled manipulator, but at the end of the day, she is unable to change course when it would be in her best interest. Her narcissism and greed are too transparent, making her vulnerable. Cruella would thus make a better evil president than America’s current reality-star-in-chief, but with serious limitations. Plus, she’s cruel to dogs, and what kind of president doesn’t have a dog? Even for an evil president, that would be simply un-American. Oh wait. Nevertheless, Cruella, we salute you!

The villain from Pixar’s The Incredibles, Syndrome, bears certain similarities to America’s evil president. For one, he lacks a villain song, although that can be excused given that he’s crafted more in the mold of a Bond villain. Jilted once upon a time by Mr. Incredible, Syndrome feels like a loser, leaving him with an insatiable appetite for validation to match that of our current narcissist-in-chief. Two things distinguish Syndrome as a villain of superior caliber relative to the Donald, however. Firstly, Syndrome actually does have a “very good brain,” so he doesn’t have to go around saying so. Secondly, as twisted and misguided as it is, he does have a sort of egalitarian vision. Syndrome, it would seem, is not entirely lacking in empathy and self-awareness, making him more comparable to traumatized historical villains who started out seeking justice, such as Vladimir Lenin, than to the greed-driven nincompoop currently posing as the leader of the free world. Syndrome, we salute you! If the vote were between you and Donald Trump for evil president, I would go with you any day of the week.

Like Syndrome, The Simpsons’ Mr. Burns lacks a villain song, and yet he has the authentic class, intelligence, and sophistication that our sad president can only aspire to. One could compare Mr. Burns to Fred Trump, but to compare him to Fred’s problem child is simply impossible. Mr. Burns is tech savvy enough to run a nuclear power plant, but he would never spout off in pathetic Twitter tirades (and if he even had the inclination, Smithers would surely manage to prevent him). Though occasionally enticed to try, Mr. Burns is incapable of pulling off faux-populism. He could never have been a reality TV star, and unlike the incompetent in the White House (when he’s even there, and not at Mar-a-Lago letting his hangers-on pose for pictures with the nuclear football), Mr. Burns really does have “lots of things happening.” Mr. Burns, we salute you! You would make a decent evil president.

Class! Sophistication! Sarcastic wit! And, to top it all off, a deep bass voice and a villain song, “Be Prepared,” that will surely go down in history as one of Disney’s best production numbers. Yes, Scar of The Lion King has many fine qualities to offer in a potential evil president. Much like #NotMyPresident Donald, Scar depends on a foreign power to help him take over Pride Rock in a coup – the hyenas. Unlike Donald, Scar is intelligent enough to come up with the entire plan himself. Never for one moment is he used by the hyenas more than he uses them. Scar also exhibits a certain boldness in this regard. Instead of taking to whatever the savannah equivalent of Twitter would be to whine about how the Scar-Hyenas scandal is #FAKENEWS, Scar openly invites the hyenas to live with the lions. It may not have been the best thing for his PR, of course, but everything might have worked out fine if they hadn’t run out of food. Scar, we salute you!

The cartoon villains highlighted above would all represent a substantial improvement over America’s current evil president. Even so, each one pales in comparison to the sea witch Ursula from Disney’s The Little Mermaid. Flanked by her eel minions Flotsam and Jetsam, Ursula is a better plotter and manipulator than all of the above villains combined (with the exception of Scar). As a devious dealmaker, she puts the Donald to shame (and she honors her contracts; it’s just generally a very bad idea to sign one). But Ursula is not only a tough negotiator. She’s also savvy and charming, two things our sad Donald is, well, not. And unlike Donald, who’s a run-of-the-mill mediocre white man with unearned wealth, Ursula has a compelling backstory as motivation, a feature she shares with Scar and Syndrome. In comparison, America’s current loser-in-chief can only be called “Pathetic!” Last but not least, Ursula’s “Poor, Unfortunate Souls” is the single best villain song of all time. This is not an opinion; it is a fact. Given that the USA is a free country (sort of), you are of course welcome to disagree. If you do, however, I will accuse you of succumbing to #AlternativeFacts.

So, where does this leave us? In a rather sorry state, I’m afraid. Once again, my fellow Americans, we must face facts. If our country has decided to become evil, did we have to do it in such a ham-handed, unsophisticated way, simply confirming to our more sophisticated allies that even in evil we are nothing but yokels? America, we can do better. If it’s to be evil presidents from here on out, then I’m getting on the Ursula 2020 train. It’s high time America elected a woman president (er, well, an octopus-witch-woman at least), am I right? And if it’s evil deal making we want, there is no one more qualified. So, my fellow Americans, will you join me in supporting the Ursula 2020 campaign? Let’s Make. Evil. Great. Again! #MEGA!

Which cartoon villains do you think would make good evil presidents? Let me know in the comments!